Deonna Purrazzo has made it clear that she wants to walk through the Forbidden Door to team up with AEW superstar Britt Baker.

During an interview on Busted Open Radio, Deonna Purrazzo said that the narrative of her and Baker wrestling has sort of been pushed. However, for the time being, Purrazzo is happy to see the people around her succeed.

Purrazzo even mentioned the possibility of her and Baker winning the IMPACT Knockouts Tag Team Championships. (H/T: Fightful)

“That’s a dream for Britt and I more so than it probably was for anyone else to begin with. We’ve kind of pushed this narrative that we want to wrestle each other. Whether it happens or not, I’m just happy to see the people I love succeed and the people who deserve to succeed, succeeding. I love everything she’s doing. I love the confidence she has. She’s the baddest bi*ch on the block, for real. Whether I get to wrestle her or not, that’s a dream come true, but it’s also hard. I’m the Knockouts Champion and now the Reina de Reinas Champion and she’s the AEW Women’s Champion. So, what’s the outcome? I’d rather us be a tag team and no one has to lose their belts. Then, IMPACT will let us be the Knockouts Tag Team Champions, maybe,” revealed Purrazzo.

Having also captured the Reina de Reinas Championship at TripleMania XXIX, Deonna Purrazzo is ready to form an all champions team with Baker. Currently in possession of two world titles, the Knockouts Champion went on to ask what the outcome would be if she and the AEW Women’s Champion had teamed up.

Deonna Purrazzo has been nearly unstoppable since returning to IMPACT Wrestling

Since marking her return to the IMPACT Zone, Deonna Purrazzo has been the face of the IMPACT Knockouts Division. A two-time Knockouts Champion, Purrazzo is currently in her second reign and also successfully defended the belt at TripleMania XXIX.

In a Champion vs. Champion match against Faby Apache, Deonna Purrazzo became a double champion. In doing so, she also successfully defended the IMPACT Knockouts Championship.

Last week, AEW created history with the debut of Rampage, and immediately created an impact with three major matches on the show. However, with Britt Baker, AEW fans in her hometown greeted her as the returning hero, even though she was a heel. Join Rick Ucchino as he breaks down what AEW did and why that worked: 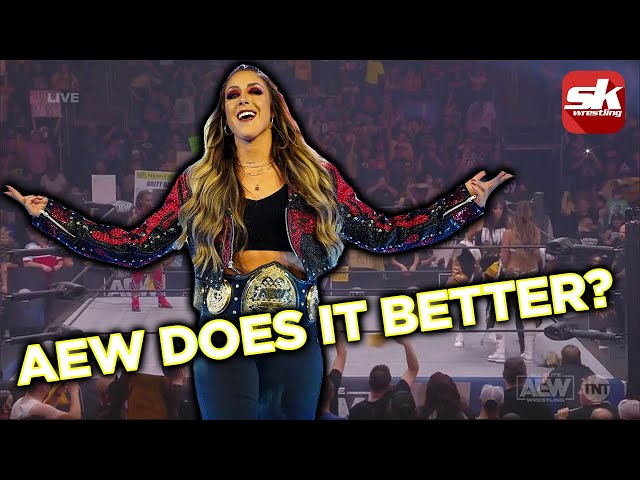 Dr. Britt Baker has been on fire. Check out what our very own Rick Ucchino thinks about her booking!